I've been watching a lot of films over the last month, and thought it would be fun to share. Instead of about 12 different reviews, I thought I'd combine it in one post. I find it easier to sum them up than to discuss one particular film.

If you like the facebook page, and if not click here (*shameless plug*), you will have noticed I purchased heaps of DVDS. That is partly where these reviews come from: 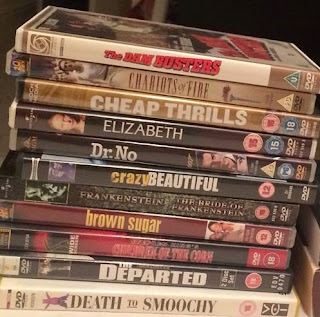 1. Dam Busters (1955)
I honestly couldn't tell you one small detail of what happened. It wasn't my thing and felt like watching paint dry. I was surprised as I usually like learning more about WW2, and with it being scored  at 7.4/10 on IMDb, I was confident I'd enjoy it.
My rating: 2/10 - I just couldn't take to it, but it is a true story and something worth knowing more. I strongly believe WW2 must never be forgotten!

2. Chariots of Fire (1981)
It felt a bit overrated. I couldn't connect with the characters or any of the story. It was another true story which I thought might be interesting. It's set after WW1 in 1924 where Brits, Harold Abrahams and Eric Liddell are natural athletes, and it shows how their lives compare. I do feel like I might be alone in my disappointment of the film as it received 4 oscars, 14 other awards and 19 nominations.
My rating: 3/10 - I knew part of what was happening, and the story itself is interesting. I just don't feel it came across well in the film

3. Cheap Thrills (2013)
This was safely one of the most fucked up (that is really the only word to sum it up - sorry if the swearing offends) films I've seen, and I've watched messed-up films from the likes of Lars Von Trier. I mean I've watched Antichrist, and didn't think I could be easily shocked after that! It centres around two friends, who come across a couple in a bar who make bets for them to do some crazy stuff. It starts off tame with whoever drinks the shot, get $50 and leads to so much worse. One of the worst including betting $15,000 to chop off a pinky finger. That's not even the end of that finger, it comes to haunt twice more with some bizarre bets and turn of events.
My rating: 7/10 - It was really messed up, but in fairness I couldn't stop watching this black comedy. I wouldn't watch it again, and not sure I'd watch it again, but it was definitely memorable. I also realised I wouldn't do much for a bet!

4. Elizabeth (1998)
This era of history has always fascinated me. From the reign of Henry VIII to that of his children. It was one of my favourite eras to learn in history. Divorced, beheaded, died, divorced, beheaded, survived - I can never forget that! Onto the film...I find it hard to stay focused on period dramas, but I loved this. I can't think what I enjoyed most, but it featured Elizabeth as the longest reigning of her siblings, her struggles in power and looking for suitors as queen. I was hooked throughout.
My rating: 9/10 - This was amazing, and think most would enjoy watching this. I definitely recommend watching this!

5. Dr. No (1962)
Released 2 years before my mum was born, I wasn't sure whether I'd appreciate it. I'm not huge on action, so I found this hard to follow at times, but love that era of films - the colour, fashions and almost "put-on" voices (not sure how to describe it). However it was easy viewing, and I can now understand how Sean Connery might be a favourite Bond actor.
My rating: 7/10 - Another film I'd recommend watching! It's a great combination of action, drama and romance.

6. Crazy Beautiful (2001)
It was a teen rom-com, which made me feel like I was just a couple of years too old to watch! That being said, I found it easy to follow and would compare it in some ways to a teenage Silver Linings Playbook. I like how Nicole (Kirsten Dunst) and Carlos (Jay Hernandez) characters have completely different lives with different problems and ambitions. It is all about how they cross paths, and their lives are changed forever. Wild child, Nicole helps Carlos fly a plane for the first time, but how will Carlos change Nicole's outlook to life?
My rating: 8/10 - I really enjoyed watching this, but not sure whether I'd necessarily recommend it. You will know from reading my review if it's a story that appeals to you.

7. Frankenstein (1931)
I wanted to watch this, as I couldn't connect to the book. Usually when this happens, it helps me understand and picture what is going on better. It helped when I struggled to read 1984. However this didn't work. It seemed out-dated and too bizarre to keep me interested. The only thing that I enjoyed was that it was short. How many films are a mere 71 minutes? I also like the way it is filmed in terms of black and white, makeup and costume.
My rating: 3/10 - It is worth watching as it is a true classic, but I just didn't take to it.

8. The Bride of Frankenstein (1935)
Unlike most sequels, I like this much more. I found it much easier to follow. I even found the housemaid woman to be funny to watch. When Frankenstein's monster says "friend, lady friend" it also reminded me of Inbetweeners, and couldn't stop laughing.
My rating: 4/10 - I did enjoy this more to the prequel, but it was still not my favourite.

9. Brown Sugar (2002)
Reviewers have compared this to When Harry met Sally. I can see why because it follows the premise of two friends (except more childhood friends), who come to consider a relationship together. Once compared, I didn't think it would be as good as the rom-com classic, but I still loved it. It shows true love, friendship, comedy and links with the love of music. With a combined love for hip-hop, the story of Andre and Sidney is interesting to follow.
My rating:  8/10 - I'd recommend to anyone who loves a good rom-com.

11. The Departed (2006)
I always get confused with Matt Damon and Leo Dicaprio, so if like me, you might find it harder to follow...otherwise I think it was really well acted. It's another film Leo should have got an oscar for! I loved how it was a true story, and enjoyed watching this thriller.
My rating: 7.5/10 - I'd definitely recommend this film as it explores the story of a mole in the mob and mole in the police force.

12. Death to Smoochy (2002)
What can I say? Robin William stars, I can never fault a film that he's in. Even One Hour Photo was great in my eyes! It follows the story of two rival children entertainers, some comedy and some action.
My rating: 7/10 - I recommend this as it's easy viewing, and unlike many comedies it's not completely predictable in plot.

13. East is East (1999)
My mum said it was one of her favourite films, and I watched it again. I watched it when I was in school (not sure when), and didn't remember much but it was fun to watch. It has the elements of every good genre - action, growing-age, comedy, romance, drama. My favourite scene had to be towards the end, when the art project is revealed. It is funny but cover hard-hitting issues of living around racism and conflicting cultures.
My rating: 9/10 - I think this is great for anyone to watch. It shows how it is to grow up in Britain with Pakistani heritage. You learn a lot about the traditions followed by lots of comedy as it's set in Salford. I also just found out they did a sequel - West is West, which I will need to watch too.

Lots of great and not so great films over the past month - what films have you seen recently? I want to see Trainspotting 2 and more films from my list.
Posted by Unknown at 13:42